🕒 Timeline in 5 Centimeters per Second

Takaki Tōno meets Akari Shinohara in the fourth grade of elementary school. Since both of them had to move often due to their parents' work, they are always awkward around others; however, because of their similar circumstances, they become close friends. Takaki confesses to Akari his dream of becoming a cosmonaut, and she encourages him in pursuing such a dream. Due to how close they were, rumours about them being in a romantic relationship begins to sprout out. However, towards the end of elementary school, Akari discovers that her family had to move away to Iwafune. Despite her intent to go to the same junior high school as Takaki in Tokyo, she could do nothing but accept it. During the graduation day, Takaki couldn't properly say goodbye to Akari.

In middle school, Takaki and Akari keep in contact through letters. However, with time the letters become less frequent. When Takaki's parents tells him that they are to move to Tanegashima, he decides to meet Akari when he still has the chance. The day of the meeting, he brings a letter which he hopes to convey to her his feelings with. Unfortunately, a severe snowstorm delays the train, and he arrives in Iwafune many hours after the appointed time, losing the letter in the process, but Akari is still there. After he eats a bento she made for him, they wanders around in the snow, sharing a kiss in front of a cherry tree before finding a shed to sleep into. The next morning, Takaki boards the train to Tokyo, with Akari telling him that he would be fine no matter what.

In 1999, Takaki is now in the third year of senior high in Tanegashima, where the Tanegashima Space Center is located. Kanae Sumida, a classmate of Takaki, has been in love with him ever since meeting him in junior high school but has never had the courage to confess her feelings. She tries to spend time with him, waiting long after school for the chance to travel home together. However, Takaki appears ignorant to Kanae's feelings and only treats her as a good friend. Kanae observes that Takaki is always writing emails to someone or staring off into the distance as if searching for something far away. It is later shown that Takaki's emails are not being sent to anyone, and that he has had recurring dreams which feature Akari. After a failed attempt to tell Takaki she loves him, Kanae eventually realizes that he is looking for something far beyond what she can offer and decides not to, though she believes she will always love him.

It is 2008. Takaki is now a programmer in Tokyo. Meanwhile, Akari is preparing to get married to another man. Takaki still longs for Akari to the detriment of his lifestyle. He receives a call from his current girlfriend but does not answer, signifying the relationship's end. Depressed, Takaki quits his job, unable to cope with his feelings for Akari. Akari goes through a box of her old possessions and finds the letter she had written to Takaki many years ago. Takaki finds himself in a convenience store reading a magazine about the rocket he saw launched in years ago. With a hit song played in the background, Takaki and Akari begin a dual narration, both recalling a recent dream. In this dream, they relive their last meeting in the snow-filled Iwafune, and remember the wish to someday watch the cherry blossoms together again.

One day while walking down the same road they had while they were children, Takaki and Akari appear to pass and recognize each other at a train crossing. On opposite sides of the tracks, they stop and begin to look back, but passing trains cut off their view. Takaki waits for the trains to pass and finds that Akari is gone. After a moment, he smiles to himself and continues walking as the cherry blossoms stir in the train's wake.

Akari Shinohara
Add a photo to this gallery

Takaki Tōno
Add a photo to this gallery

Akari Shinohara
Add a photo to this gallery 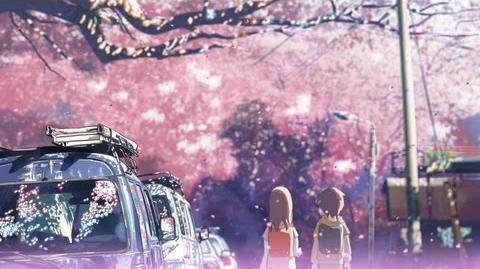 Another poster for the movie
Add a photo to this gallery
Retrieved from "https://makotoshinkai.fandom.com/wiki/5_Centimeters_per_Second?oldid=5074"
Community content is available under CC-BY-SA unless otherwise noted.