Makoto Shinkai Wiki
Register
Don't have an account?
Sign In
Advertisement
in: Male, The Garden of Words characters, Your Name. characters

Takao Akizuki
in The Garden of Words

Takao Akizuki (秋月 孝雄, Akizuki Takao), formerly called Takao Fujisawa (藤沢 孝雄, Fujisawa Takao), is one of the main characters in The Garden of Words. He is a fifteen-year-old high school student and an aspiring shoemaker. On rainy mornings, he skips school and builds a close relationship with Yukari Yukino.

He was born to Takashi Fujisawa and Reimi Akizuki, nine years after they gave birth to their first son Shōta Akizuki. In one of his mother's birthday, his family gathered in a park to give her presents, which is memorized by Takao even years later.

In his first year in the junior high school, he had a crush to Miho Kasuga, a senior schoolmate and stole her first kiss. However, their relationship was upset by his parents' sudden divorce, and before he could reconcile with her, she had moved away.

In The Garden of Words

On a rainy day in June, Takao Akizuki decided to skip school and visited the Shinjuku Gyo-en, a garden located in Shinjuku. There he encountered Yukari Yukino, a 27-year-old woman who was skipping work. While they sat on the wooden shelter in silence, Takao sketched multiple illustrations of shoes. He studied Yukari for a moment, until he accidentally dropped his eraser. She returned it back to him. Soon after, Takao decided to ask Yukari if they had met before, to which she responded with a simple 'no'. Takao continued to sketch, until Yukari bidded him farewell with a tanka poem. This left Takao puzzled to its meaning and origin.

The two continued to encounter each other and socialize in the park on rainy mornings, but never formally introduced themselves. After Yukari expressesed an interest in Takao's shoemaking, he decided to make a pair of shoes in her size. With the end of the rainy season, Takao stopped visiting the park and focused on his work.

Following summer break, Takao returned to school and spotted Yukari. His friends informed him that she was a literature teacher and that she had been the target of gossip and bullying. Out of kindness and to avoid further confrontation, Yukari opted to avoid work and retreat to the park, hoping she would learn to overcome her fears and be able to "walk" again. However, Yukari quit her job and left the school. That afternoon, Takao met Yukari at the park and greeted her by reciting the 2,514th poem from the Man'yōshū Japanese poetry collection, the correct response to her tanka, which he found in a classic Japanese literature textbook. After getting soaked by a sudden thunderstorm, both headed to Yukari's apartment and spent the afternoon together. When Takao confessed his love following dinner, Yukari was visibly moved, but then reminded him that she was a teacher and told him that she was moving back to her hometown on Shikoku. After Takao abruptly excused himself, Yukari realized her mistake and ran after him, finding him in the stairwell. Still upset, Takao angrily took back what he had said and criticized her for being so secretive and never opening up to him. Yukari embraced him and the two cried while she explained that their time together in the park had saved her.

The credits show Takao barely passing his final exams, but still working towards his goals, while Yukari moved back to Shikoku and resumed her teaching career. In a post-credits scene, Takao revisited the park in 2014, read a letter from Yukari and placed the shoes he had finished on the bench while vowing that he would find her after he has made progress with his career.

In The Garden of Words novel

One and a half year later, he prepared to study abroad in Italy, and had a party with his family. When he was in Italy, he exchanged emails with Yukari Yukino, but they avoided discussing personal issues.

In May 2018, he had some days off and decided to return to Japan, in which he reunited with Yukino and delivered his promised shoes.

In The Garden of Words manga

In the end, Yukari Yukino was seen wearing Takao Akizuki's shoes as her lucky charm. 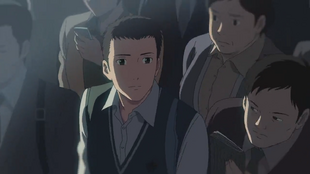 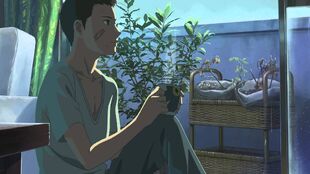