Weathering With You (天気の子, Tenki no Ko, Child of Weather) is a Japanese animated film by Makoto Shinkai. It is his sixth feature film.

🕒 Timeline in Weathering With You

Japan is experiencing a period of exceptionally wet weather. A teenage girl named Hina Amano sees a pool of sunlight at a ruined shrine atop a dilapidated building while attending to her dying mother in a nearby hospital. Hina leaves her mother's bedside and goes to the shrine, crosses its gate, and is momentarily transported to a world seemingly in the sky.

High-school freshman Hodaka Morishima runs away from his home and moves to Tokyo. On the trip, he almost gets thrown off a ferry when a freak rainstorm hits it. However, he is saved by a man named Keisuke Suga, who gives Hodaka his business card in case he ever needed help. In Tokyo, he struggles to support himself because he is unable to work legally due to his status as a runaway minor. After being kicked out of a lift lobby that he had been using as a shelter, he finds a gun inside a trash bin and then keeps it as a lucky charm, thinking that it was only a toy. He briefly encounters Hina at a fast-food restaurant where she works at. She takes pity on Hodaka, giving him a free meal. Hodaka contacts Suga and is hired as an assistant to his small publishing company. At work, Hodaka meets Natsumi, Suga's niece who Hodaka mistakes as his mistress.They investigate urban legends relating to the unusual weather in Tokyo; from a psychic, they hear the legend of a 'sunshine girl' and a 'rain girl'—a girl who can control the weather.

On a rainy day, Hodaka watches as Hina is being intimidated into working at a sketchy club and attempts to rescue her. They then run away and the club host pursues them. He becomes pinned down by the club host, but manages to shock him by firing the gun he had found earlier. The two teens escape to a nearby abandoned building where she chides him for interfering, explaining that she needed the job to support herself and her sibling after being fired from her previous job at the fast food restaurant. However, she warms up to him and proceeds to demonstrate her ability to clear the sky by praying. Inspired by the idea of 'sunshine girl', Hodaka visits Hina at her home and proposes that they start a business together; Hina would provide her mysterious ability to people who want clear weather for special events. Their business becomes a great success and they attract a large number of clients ranging from kindergarten students to corporate giants. He also meets with Hodaka's younger brother Nagi at Hina's home. Suga and Natsumi continue to investigate urban legends surrounding the mysterious girl who can change the weather. They visit a priest who tells them a legend of a weather maiden whose power comes at a great price.

At Hina's living quarters, Hodaka hides in the bathroom as the police interrogate Hina about Hodaka's whereabouts. It is revealed that Hodaka's parents filed a missing person report and the police officers are investigating his use and possession of illegal firearms. An officer informs Hina that social services will be called in to take away Nagi, Hina's younger brother, because they are minors with no legal guardian. Once the police officers left, Hodaka visits Suga in his car, who fires him from his job and gives him severance pay. Suga apologizes for his inability to help Hodaka any further because he doesn't want any complications that could deter his filing for custody for his daughter.

Hodaka decides to run away with Hina and Nagi, but the weather worsens even more abnormally as it starts to snow. On the streets, the three are apprehended and Hodaka is caught by two police officers as he attempts to run away but is saved by Hina, who distracts the police by praying for lightning to strike nearby. This then allows the trio to escape to a hotel.

They spend the night at the hotel. As they were about to sleep, Hina confesses to Hodaka that her body is slowly being turned into water, and that she learned from Natsumi about the story of the weather maiden who becomes a living sacrifice; the weather will only return to normal if she disappears permanently into the clouds. He refuses to let this happen and promises to protect her. But the next day, Hina goes missing and the rains have consequently stopped. Hodaka sets out to find her but he and Nagi are taken by the police before they can leave the hotel. Hodaka manages to escape the police station and gains the help of Natsumi as she is passing by. The police chase Hodaka until he reaches the building with the shrine, where Hina first got her powers. Inside, he encounters Suga, who attempts to stop him from running away any further. The police manage to infiltrate the building and has Hodaka surrounded. Driven by his concern for the desperate Hodaka, Suga helps him escape from the Takai police, follow by Nagi appearing and stopping Yasui. Hodaka manages to reach the top of the building and jumps through the shrine. He is then transported above the world in the sky and rescues Hina. As they fall to earth, Hodaka begs Hina to start living for herself and the rains resumes with no foreseeable end.

Three years pass; Hodaka, who has been on probation, graduates from high school and immediately returns to live in a now half-submerged Tokyo. He goes to meet Suga, who has expanded his business to talk regarding seeing Hina. He then looks for Hina whom he has not spoken to in the last three years. While walking on a rainy day, he finds Hina praying on the other end of the street, and the two are finally reunited. 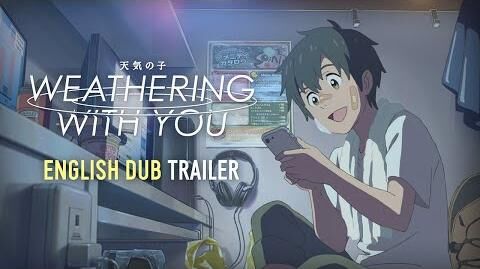 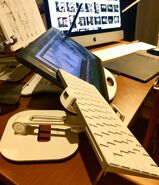 Radwimps continues to be in charge of the film's music, with the theme song "Ai ni Dekiru koto wa Mada Arukai" written by Yojiro Noda. The theme song "Grand Escape" is performed by Toko Miura.